“What?” I must have been dreaming. I started to groggily wake myself up.

Wait, what? I must have still been half-asleep. I turned over and see my wife standing in the bedroom doorway. “What?”

Okay, now I knew I was awake and it’s not a dream. The realization began to dawn on me: We’re going to be parents. Without saying a word, I stretched out my arms to my wife, the universal sign for “come here and give me a big hug that neither of us wants to end.”

We had actually been trying for a while. It had been around a year and a half since we had seriously started to try. Granted, certain circumstances that I won’t go into likely made it more difficult, but those had for the most part been cleared up six months before.

Thus began our journey to being parents. We went through a lot of the usual trials and some unsusual ones. We, or rather I should say I, found out the sex of the baby through a genetic test and had to keep it secret from my wife so she could be surprised at the gender reveal. That reveal was one year ago today, Father’s Day 2018, when we revealed to the family not only that we were having a baby, but we were having a girl.

It was a difficult journey. Unfortunately, my wife developed gestational diabetes and had to be extremely careful about what she ate, as well as take insulin three times a day. I don’t envy what she had to go through, but I will say and will never stop saying how much I admire her commitment to bringing a healthy baby into the world.

We went through our usual milestones. I still remember the first time that I felt the baby kick in her tummy. And I made sure to talk to the baby all the time, which will play into the story in a bit.

When the big day came (induced one week early, because she was considered to be a high-risk pregnancy, so they wanted to be sure that it was controlled), I dropped my wife off at the hospital and went into work. They said that it would take a minimum of 12 hours, so I had some time. I felt guilty leaving her there, but she knew that I needed to work. And the long weekend commenced. Hours stretched into days. Unfortunately, it appeared that our daughter was reluctant to make her big debut.

That Sunday evening, I had gone up to my shop to put a sign in the door that we would be closed the next day due to “family” reasons, since by then it was apparent that I would not be going in. While I was there, I received a call from my sister-in-law that there was something wrong and I needed to get back there. Of course, I ended up hitting traffic on my way and it took forever for me to get back to the hospital. I literally ran to her hospital room and told the doctor to give me the thirty second rundown. In short, she had started to spike a fever and the baby’s heart rate had begun to drop, meaning she was in distress, so they had to prep my wife for an emergency C-section.

At this point, we were both getting very scared, although I had to suppress my own emotions to be as stable for my wife as possible, because whatever I was going through, she had it a hundred times worse. I got into surgery garb and waited for them to tell me to come into the OR.

I remember it feeling very warm in there, much warmer than I would have expected. I sat down on a stool next to my wife, who I could tell was trying to hold it together. I knew she was upset by this turn of events, but she was doing what needed to be done. They had a sheet raised over her midsection so we couldn’t see what they were doing. I honestly had thought about taking a peek over the sheet out of curiosity since I’m not squeamish, but I knew that my number one job was to comfort my wife (that and, as they say, if you like sausage, never watch how it’s made). So I sat there holding my wife’s hand as she squeezed mine, almost to the point of breaking. They actually told her to loosen her grip on my hand because the sensor attached to her finger was losing the reading.

The actual surgery was pretty quick, but we didn’t know it. Time felt weird in there, and we weren’t sure if we were in there for an hour or for five minutes. Then they announced that the baby was out, along with “Come on, baby! Come on, baby!” And time stood still as my wife quietly said, “Why aren’t I hearing her cry?” Later, we found out that she was born limp because at this point labor had been going on for three days, and not only was my wife exhausted, but the baby was exhausted as well. Then, to our relief, we finally heard her start crying. They brought her over to the table where I cut the umbilical cord, something I was not sure about doing, but I figured that I’ll probably not get another chance to do that, and I saw her clearly for the first time.

And it still hadn’t hit me yet. You know what I mean. That moment when they say you become a father. I’ve heard it said that a woman becomes a mother when she becomes pregnant, but a man becomes a father when he sees the baby. It didn’t happen that way. I had seen her in the ultrasounds. I had felt her kick in my wife’s belly. I had now seen her in the flesh. Each of these had slowly helped solidify the concept that I was a father, but I wasn’t quite there.

They cleaned our daughter up, swaddled her, and handed her to me since they were still working on my wife. She was small and her eyes were closed peacefully, resting after the long labor. This was actually the first time in my life I had ever held a baby, but I was still not having that magical moment. So, I did the first thing I could think of.

With that, she opened her eyes with a look of recognition, like she was saying, “I’ve heard that voice before,” and studied my face.

And that was the moment. With an explosion inside my head, I was a father. In that moment, I knew that my life had led to this little baby and that I would do anything for her.

Today not only marks six months since she was born, but also my first Father’s Day as a father. I’ve had a crash course in baby care and now have some time to reflect. I would say that, even as difficult as it can be at times, based on some stories we’ve heard, we’ve actually been pretty lucky, and have a very healthy, happy baby who continues to develop and amaze us. 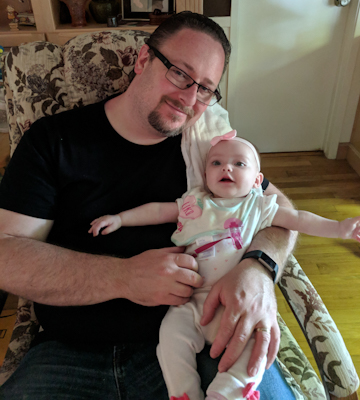 Why I Review Books

I’ve been reviewing a lot of books on this blog lately. The question comes up about why I review these books. Do I get paid or what? Well, let me tell you how it started.

I started this blog a little while ago just to have a place that I could write in long form, have a bit of a soapbox, and to publicly talk about what I was working on or what was going on. I’m still working on my writing. Actually, lately, I’m picking up the pace, although the novel I have been working on has taken a bit of a back-burner right now while I try to develop my skills a little more. It’s a project that’s really important to me and I want to be sure that I can do it justice. Being able to publicly talk about it creates a feeling of accountability. Admittedly, it does help with marketing if you know how to leverage it, which is something I’m working on. So, it’s not entirely for art’s sake.

I started reviewing books on this blog mostly because I needed content. It was very early in my blog’s life and I need to add content. At the time, things had kind of come to standstill with…well, everything. So I started putting my name on lists for review copies of books in several locations and began receiving some. The caveat with getting these is that they want you to provide them with a review, which is only fair. They give you a free book, you pay them with an honest review. I started putting these reviews on this blog and there you have it. It just became a thing.

I enjoy doing it because, aside from writing, I also enjoy reading. By reviewing these books, not only do I get to share my opinions and potentially help some authors, particularly new authors, but I get to reflect on what I just read and chew it over a little more, making sure I really understood it and got the most out of it. Do I get paid for it or do I want to get paid? Well, I don’t really get paid (with the Bizarro Brigade, I earn points toward receiving a free book, but that’s it). As for whether would I like to be paid, sure. Everyone would like to be paid for just about everything they do. I’d like to get paid for breathing, but that’s probably not going to happen. But if I were to ever get hired by a website or other publication to write reviews, I wouldn’t object. And I’m hoping that when I do start publishing my work (soon, I hope, once I get what I’m working on to a state I’m happy with), that they might return the favor of reading and providing an honest review. I can take criticism, and really I prefer honesty over anything else.

I did get myself into a situation a little while ago where I wound up receiving so many review copies that I couldn’t keep up. I’m still catching up, but I’m making a lot of headway. So if you’re a writer, editor, or publisher who needs a review and you want to send me a review copy, you’re welcome to contact me at the link above, but remember that I’m still catching up, and I’ll get to your book as soon as I can.