Thanks For Dropping By: In Loving Memory of Ralph Nylander

Note: This is a little late, and while I probably should have had this available weeks ago, for obvious reasons it’s been extremely difficult to write anything, let alone this. Despite the delay, I’ve decide to put this up because I told myself I would and for my grandfather, but don’t feel any obligation to read it.

I want to tell you about my grandfather. No, I’m not going to give you a biography, or tell you stories about his time in the Navy in World War II, or things like that. There are other people who were closer to those stories who could tell them better than I could. Instead, I want to tell you about the man I personally knew during my life.

The first thing you would probably notice is that he was a quiet man. He wasn’t the most talkative, and I can’t recall one incident where I ever heard him raise his voice. He was always calm in the face of adversity, almost Zen-like.

My grandfather worked. A lot. As an electrician, he was always working on different properties and on the move. But even then, he always had some project he was working on, building something, fixing something, renovating something. He was always happiest with something to do. I think when he finally retired, more out of necessity because his body just wouldn’t take it anymore than an actual desire to retire, it was one of the hardest things he had to do.

Partly because of all his work, we always knew that if we ever needed anything, any piece of equipment, any tool, he probably had it. My grandfather was a packrat, something that both my father and I have inherited, although not on the level my grandfather showed. About ten years ago, when my grandparents were moving after having been in their house for more than 20 years, we had to help them clean the house out of things they weren’t going to take with them. Ultimately, we had to haul off two 40-foot dumpsters, something that, just by looking at him, he wasn’t happy about in the least. It was a kind of emotional pain that was difficult to see on such a kind man.

And my grandfather was a very kind and polite man. Another thing that people would notice after visiting with him for a while was…well, it’s really hard to describe. It was as though he always had a smile in his eyes, a twinkle that never left.

Despite his penchant for work (and work he did; right before going in for knee replacement surgery, he was up on the roof of their house installing a satellite dish), he always had time for his family. At the house I grew up in in my earlier years, he had a shop attached to the garage, and he came by often to get tools and equipment, make phone calls, and other stuff. But he always made time for me if I was there and never turned me away. He was a family man, and even as his health was failing, you could see in his eyes that he loved having his family around and was very protective of us.

And through everything, my grandfather was one of the most polite men I’ve ever known. Always kind and gentle, even in the hospital when he was the most uncomfortable, he would thanks the nurses for their help. As the Alzheimer’s Disease did its work and his body was failing, who a person is at their core really comes through. And this was who he was. That kindness and politeness never left him the whole time. He even seemed uncomfortable, not just because of the physical pain, but because people were making such a fuss over him. He was always self-effacing, never wanting accolades or fusses made over him. I remember that during my grandparents’ 50th wedding anniversary party, while he loved having his family around, he felt embarrassed and mostly tolerated the fact people were there to celebrate him and my grandmother. He never felt he needed to be praised for simply doing the right thing, because you’re supposed to do the right thing because it’s the right thing.

On July 29, 2012, my grandfather, Ralph Nylander, passed away after complications from Alzheimer’s disease. There are some who say that we’re only passing through this life, that it’s temporary no matter what you do. I consider myself very lucky to be his grandson and to have had him pass through my life. I’ve always said that people should be treated politely, but shouldn’t get genuine respect by default. That kind of respect needs to be earned and deserved. And my grandfather was most deserving of that respect. He would probably be incredibly embarrassed to be reading this as he hated this kind of fuss over him, but it needs to be said nonetheless. He was a kind, gentle, hard-working man who just did the right thing and led a good life. Someone that others could look up to and respect. I guess what I really want to say is this:

Thanks for dropping by, Grandpa. 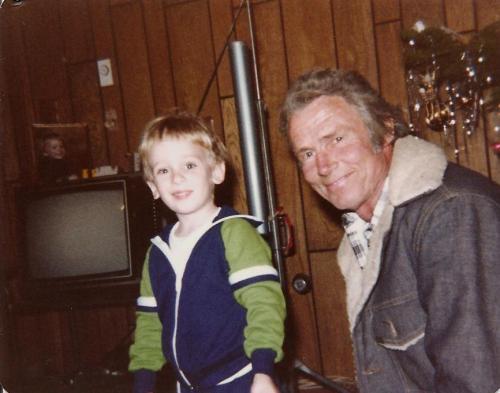